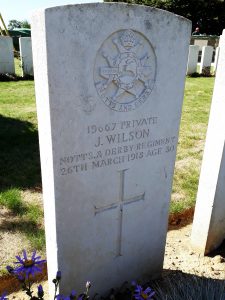 been wounded’). Grave, Ennemain Communal Cemetery Extension, Somme, France, which contains just 37 casualties. Ref; 11-A-8. Parents listed as Joseph and Martha Wilson (then later of Edge View, Eyam, although his father was no longer alive.)  b 1888 Hathersage, both his parents were b Hathersage. 1891C lived at Old Dale, Hathersage. 1901C living at Eyam, a boot riveter, with siblings William Henry, Sarah, Mary and Ernest, all born at Hathersage. 1911C living at Steeple House, Eyam. No military records have been found for his brothers, Eyam Museum does not think they were involved. Possibly they worked at the boot factory who applied for exemptions for several men, and who could well have been making Army boots. Brother in law to James Harling who married his sister Sarah b Hathersage. They were also in Eyam and in the shoe trade. James Harling’s death was reported on the same day as Joe’s, see above.