He joined up in 1916. 8984 Pte. 28 County of London Bn London Regiment, (this was the prestigious Artists Rifles Company). By April 1917 he is 2/Lt in the R.F.C. April 1918 promoted to full Lt., in the R.A.F. He was awarded the CROIX DE GUERRE with Palme by the French in Nov 1918.  b 15/8/1898 at ‘Hanging Cote’, Hathersage Booths. Son of Arthur Wild & Mary Elizabeth Cotterill.  (His father was listed as a Brass Founder, Quarry Owner & Supplier of Fire Resistant goods. His company was William Wild & Sons Ltd. Brass Founders & Refractory Material Merchants of Sheffield & Holyhead). The family subsequently moved to Hawthorne Dene, Hathersage. William was educated at Holmleigh Preparatory School Hathersage, Buxton, and later Repton, until March 1915. 1919 Voters register address; Hawthorndene, Hathersage. 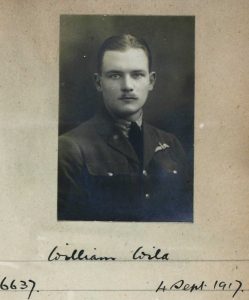 Tragically William committed suicide in Sept 1924. His body was found by Thomas Smith of Hathersage. A Scout patrol leader, Harry Daniels swam out and recovered it from water in the bottom of the local Bole Hill quarry. He had shot himself in the head. He had suffered a wound to the arm in the war, and although it didn’t cause him any pain, it was continuously discharging. The Coroner returned a verdict of suicide while suffering from depression (see Shields Daily News 16/9/1924). These days this would be considered classic case of post-traumatic stress disorder (PTSD) and surely a strong argument for him being a classed a war casualty? Then in July 1930 his 70 year old father’s body was found in the loft after taking poison. The ashes of both bodies were later spread at sea near Sheritan Cliffe off Flamborough, where Mr Wild used to sketch.