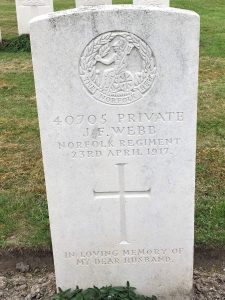 British Cemetery, France,ref; 6-B-14. He also appears on another memorial somewhere according to the inscription on Hathersage War Memorial.  b1885, bap’t Hathersage Nov 1885.  Son of Ernest & Alice Webb of Hathersage. His family, Lewthwaites lived on Main Road, also related to Mrs M Wildsmith late of ‘Stonecroft’, Ninelands Road.  1901C living at Main Road near Besom Lane, Hathersage, a labourer in a steel wire works. 1911C he was a footman to Edward Simon Marcus (Stockbroker) living in Paddington, at 3 Ormes Court, Bayswater. He married Daisy Annie Bilson of 51 St Mary’s Road, Watford, Herts in 1915  and a son Frank Ernest was born in 1917, meaning James would never have seen him. The Webbs were a rather complicated family. There was a half-sister Mary Ann by his father Ernest’s first marriage, she lived with her grandparents at Abney Grange. James had three siblings; William Henry, Kate and Ernest (who died in Infancy). Following the death of his father in 1888 his mother Alice remarried in 1893 to a William Nicholson Lewthwaite, a labourer at Derwent Valley Water Board, and they had four daughters. Fox House which was originally named Fox’s House was a Shepherd’s stone hut.  The Shepherd being one George Fox who just happened to be the Great Grandfather of James Francis Webb.