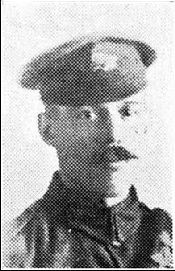 b 1886 West Marton, Yorks, son of Francis & Sarah Wallace of Skipton, Yorks. 1911C; William Wallace was a Police Constable in Leeds, before turning up in Hathersage as a gamekeeper on the Duke of Devonshire’s estate, living at Highlow with his wife of five years, Jeannie Ann, age 24 of 27 David Street, Kirckaldy, Fifeshire. No children.  1914 Voters register address; Hazelford, later at Kettleworth. Brother of Gnr Major Richard Wallace R.G.A. who D of W (received in 1916)27/10/1918, but with no other Hathersage connection. (Major Richard Wallace was actually his full name; his rank was Gunner). All three brothers fought on the Somme. On Hathersage War Memorial it is wrongly stated William was in the R.F.A. with no known relatives.