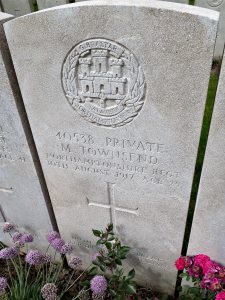 Grave ref XVii.J.14; Lijssenthoek Military Cemetery, Poperinge, near Ypres, Belgium. Awarded British & Victory medals. He is also mentioned on Bamford War Memorial.  Born 18/4/1892 Bretton Clough, Highlow. 1899 at Hathersage Roman Catholic School. 1901C at Oakes Farm Highlow, 1911C; a farm labourer at Cunnliffe House, then he worked for several years as farm man for Mrs Wallwork at the ‘Anglers Rest’, Bamford. Maurice married Collette Holmes at the Roman Catholic Chapel, Hathersage,  sister of Bernard Holmes (see above). They lived at The Hollow, Bamford, and had three children, the eldest then not four years old. Collette’s address was Croft Cottage, Bamford in 1917. She later married John Talbot of Bamford, and they had a son John Leslie Talbot who was killed in WW2 in the Royal Navy on 25 November 1941, while serving on HMS Barham.  Brother of Ellis and Geoffrey Townsend and Lottie, who married Willis Wilson of The Farm, bottom of Hathersage village Main Road. An older brother Joseph it would appear was not called up. up. Sons of Joseph & Fanny Townsend whose family had been at Bretton Clough for some 200 years, but recently (1917) of Coplow Dale Farm, Hazelbadge, Bradwell.

(Some information from Geoff Wilson, Grandson of Willis Wilson, who had ‘The Farm’ at the bottom of the Hathersage Village, now called Hathersage House and who had married Lottie Townsend, the sister).