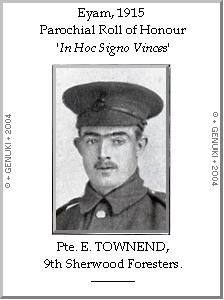 b 1896 Bretton Clough, Highlow. 1901C at Oakes Farm, Highlow, 1911C a farm labourer at Leam. Brother of Maurice and Geoffrey Townsend who were both killed, and Lottie who married Wllis Wilson of The Farm, bottom of Hathersage village Main Road. An older brother Joseph would  appear was not called up. Parents; Joseph & Fanny Townsend whose family had been at Bretton Clough for some 200 years, but recently (1917) at Coplow Dale Farm, Hazelbadge, Bradwell. After the conflict Ellis worked at Eyam View. He died in 1973.