ă He had already served with Y & L, before 17148 Guardsman, attached to 1 Bn 2 Coy Coldstream Guards. He served on garrison duty at Windsor Castle, Buckingham Palace, Tower of London and the Houses of Parliament, before going to France where he took part in several big engagements. When the Armistice was signed he was on leave, but was recalled to serve with the Army of Occupation in Germany until 1919. He was standard bearer for Hathersage Royal British Legion and was one of ten members selected to represent Derbyshire in Czechoslovakia in October 1938. In his younger days he played full back for Hathersage F C and sustained a broken leg in round two against Bishop Auckland in the 1914 Amateur Cup. At one time he spent 3 months in an army prison for striking a superior officer. A letter from Pte H Schofield was printed in High Peak News 9/12/1916 and tells of conditions at the front; (The H Schofield who wrote the letter from the front would have to be Harry as Herbert was wounded in France 19/7/1915, shipped home 2/8/1915, where he spent the duration of the war till his discharge 10/10/1917).

“I do not know what kind of weather you are having, but it is terrible out here. We are up to our knees in mud all day long, and sometimes it is up to our waist, and if we are not careful where we are going – it is nothing to hear of someone going out of sight altogether. There are very few casualties considering the conditions we are under. There is not a stick or stone left standing. The ground where we are billeted at present is where the big push started. Some of our chaps have just revealed a German dressing station, underground, of course, with two German nurses and two doctors in it, all gassed. I have been looking at a mine-crater to-day, and you could get half of Hathersage into it. It is terrible to see the destruction of things. People in England cannot realise what it is like. I see by the paper there are disputes about money matters for work done. Well there are thousands of men who would willingly work for their bare keep if they had the chance and someone would come out and fill their place. We do not get much chance of fighting, and we are only too pleased to get on some fresh ground so that we can get about better. It takes four of five pair of horses to pull a small cart along through the mud, and then there are shells of all descriptions whissing about you, and your mates falling; it is not pleasant, but the most surprising thing is to see the boys coming out of the trenches, when they have had a day’s rest and a change of clothes; they are ready for anything again. Give my best respects to all the people of Hathersage, and tell them I say we are winning. It is slow but sure, – From an old scholar and affectionate friend.” 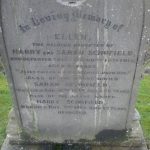 Probate given to Alice Florence Andrew, his step daughter. He is 1st on right on the WHW2W p 54 photo.  Father of Major Harry ‘Dobbin’ Schofield, who served in WW2, and who became headmaster of Hathersage C of E School.