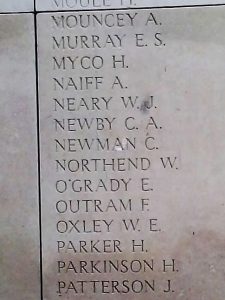 K.I.A. 31/7/1917 (DC 8/9/1917, a picture of him & a report on the front page). Remembered on Menin Gate, Memorial, Ypres. b 1894 Pontefract, son of Francis Edward Outram formerly of Hathersage, he was 2nd Footman to the Archbishop of York. The Outram family lived in the Hathersage village for many years, first appearing in 1881. Frank was eldest grandson of Georgina, who ran a Bakers & Confectioners on the Main Road. His father Francis Edward was b Grindleford.