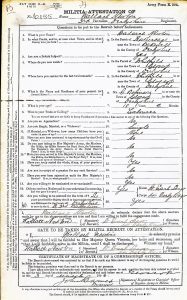 On 5/3/1898, a labourer he signed on at Glossop for 6 years as a militiaman, 6155 2 Bn Derbyshire Regt.  It would seem he lied on enlistment as being 18 years 2 months, as he would only be 17 years 2 months. b 1881 Hathersage. 1898 enlistment showed he had resided at Whitfield, Glossop for last twelve months. 1901C he is living in Scotland. 1911C living at Redditch, Worcs, a motor mechanic. Probably enlisted again, 65080 Highland Light Infantry, and served with the Black & Tans (Ireland) circa 1920. Parents Isaac and Ruth (Higginson). 1911C living at Glossop. Wallace Newton’s mother Ruth was sister to Thomas; Charlie Higginson/Newton’s father. Wallace’s wife Jeannie was Scottish and the family went back to Scotland before emigrating to Canada in 1923. They had a son also called Wallace b 1899 in Lanarkshire, Scotland, a year after the father enlisted, who probably also served. (See Aaron Newton above)