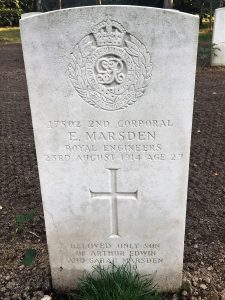 K.I.A. 23/8/1914. Grave; Hautrage Military Cemetery, Belgium, Ref; 1-D-12. News has reached Sheffield of the death in action of Corporal Edwin Marsden R.E. In a letter conveying the news of his death, Major C. W. Singer, commanding the 17 Company, R.E. paid a tribute to his heroism. “It will be a gratification to you”, he writes to Corporal Marsden’s father, “to know that he died as he had lived, as a brave soldier and a gentleman. He had just performed a most gallant deed in volunteering to blow up a bridge under very heavy fire, which he did unscathed, shortly afterwards he was hit on the head by a shrapnel bullet and expired instantaneously, without any pain…  Personally I feel I have lost a friend and a gallant comrade.”  There was a photo of him in DC 12/12/1914. Parents endowed a bed in his memory at Hathersage Red Cross Hospital. (DC 27/2/1915; mentioned in despatches by Sir John French, who said, “He had been in the Army upwards of six years and was frequently commended by his Officers for courage. During the early days of the war it was necessary that a bridge near Mons should be blown up, and as the enemy was in a strong force, the task was of extreme danger. Corporal Marsden was one of the men who undertook the work, which was carried through successfully’).  b c1886 Sheffield. 1901C at Worksop College age 14, a boarder. He was at this school for 12 months and left in 1901.His family only lived in Hathersage a short time at “The Booths“. (Rev M Hulbert’s notes gave his address as Birley Farm, but his address in the list of people mentioned in by Sir John French, was ‘Hillcrest’ i.e., Sheffield Road, which could be deemed “Booths”?) His parents Arthur Edwin & Sarah Marsden moved to ‘Stanmore’, Heatherfield, Totley, his father being an ivory dealer/ cutter.