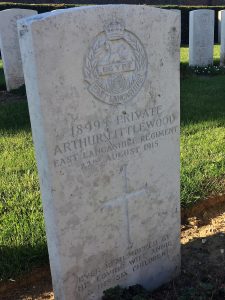 Cemetery, France. He also appears on another memorial somewhere according to the inscription on Hathersage War Memorial, possibly in Ashton-u-Lyne. (DC 11/9/1915; News was received on Friday morning by Mr and Mrs John Littlewood, Oddfellows Row, Hathersage that their son, Private Arthur Littlewood who was forty years of age, joined the East Lancashire Regiment some five months ago, and had been in the firing line about six weeks. It was while relieving trenches that he was picked off by a sniper. He resides at Ashton-under-Lyne, and leaves a widow and family of six children. Private Littlewood is the second Hathersage native to fall in the war’). He was one of 12, b c1876 and baptised 16/4/1876 at Hathersage, lived at Bean Row and 7 Oddfellows Row. Brother of Jack and Maurice, sons of John Littlewood & Louisa (Brewster), Station Road, Hathersage, husband of Ann of Ashton-u-Lyne. (according to Rev Hulbert’s record card his N of K was Mrs Jenkinson, Jaggers Lane, Hathersage and his niece was Mrs A White, Cannon Fields, Hathersage).