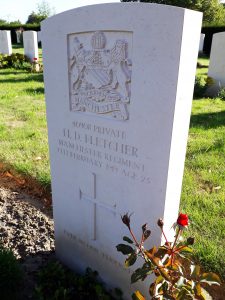 Service. His army record refers to his death from Influenza 7/2/1919, and buried at Belgrade Cemetery, Namur, Belgium. His mother signed the receipt for his medals. A Parcel of his personal effects was sent on 1/7/1920 from the Labour Corps and a Scroll of Honour sent to his father (undated). Edna age 20 listed as full blood sister on his Army records. (She would be Edna Muriel b1900 Hathersage). His name appears as ‘Harold’ on the Hathersage War Memorial, and as ‘H Fletcher’ on the Scouts Memorial Board.

b 1895 Grindleford Bridge, third son of William and Sarah Edith Fletcher, brother of Fred Fletcher, of The Crofts, (although the present ‘Crofts’ were not built then), and of Arthur Ward Fletcher & . He is shown as living at 8 Council Houses, The Dale in 1959.