ă Enlisted 25/2/1916,  335452 Pte 1/9 (Highlanders) Bn Royal Scots Dragoon Guards. He joined the battalion at the front in France, probably late 1916 or early 1917. Between 29/2/1916 to 4/3/1916 the 9th Royal Scots joined the 51st (Highland) Division.  The Division was moved to the Somme on 12 July and took part in a three division attack on High Wood on the night of 22/23 July 1916. The attack was repulsed. The Division took part in the Battle of Ancre on 13/11/1916 where the successful assault on Beaumont Hamel gained it a huge reputation. Through 1917 the Division fought at Arras, the Third Ypres/Passchendale and the Battle of Cambrai. In the Battle of Arras the role of the Division was to capture the southern shoulder of Vimy Ridge, facing a heavy enemy barrage and in places four lines of trenches. It was involved in the First Battle of the Scarpe, the Second Battle of the Scarpe, the Battle of Pilckem, and the Battle of Langemark, where probably John was injured. He was badly wounded in both legs. (DT 13/10/1917 with a photo of him, reports he is in hospital in Brighton and gives details of injury to one leg by an explosive bullet, and to the other by a bullet passing through it) He must have spent several months in hospital in France before being transferred to Kitchener’s Hospital Brighton. (DT 29/9/1917 ‘is being transferred to base’).

After Kitchener’s Hospital he was sent up to Longshaw Auxiliary Red Cross Hospital, near his home for recuperation, where he was photographed with William Henry (see below) and his wife prior to William’s enlistment in May 1918. He is pictured on a bed in the grounds of Longshaw Lodge. Longshaw’s historian told grand-niece Kate, that he had possibly been gassed and was outside as much as possible. John was officially discharged on 7/6/1918 according to his Medal Card. (DC 25/5/1918; ‘Discharged from further service due to wounds’.  b 1898 Hathersage. 1911C living at The Dale, son of John D Hickinson & Martha, (nee Wilson, daughter of James Wilson b London 1826), and brother of William Henry Hickinson and nephew of Hugo Charles and George Alfred Hickinson. His address on the 1918 absent voters list is Downing Row, Hathersage. Employed at Co-op Stores. He died in 1967 at Ashford-in-the-Water, Derbyshire. Father of Brian and Desmond. Brian lived on Downing Row, Hathersage and for many years played the drums for the AD4 Dance Band. He died in 1981. 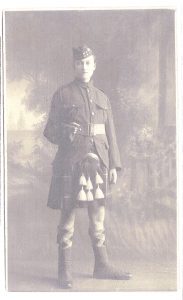