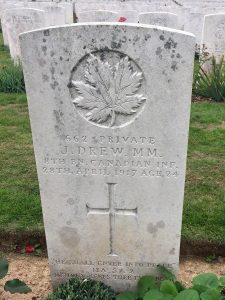 Note Sept 2015; came across C Drew KIA DC 5/5/1917 formerly of Bamford, but there is no C Drew from Bamford that fits (the only one was born in 1902) However it does fit our John Drew. Maybe C Drew was another brother? The C Drew mentioned as killed from Bamford  is in fact Charles Austin Gathergood, apparently for some reason he changed his name to Drew (which was his mother’s maiden name)