✟ ≠ 2/Lt 12 Yorkshire Hussars (Alexandra, Princess of Wales Own) attached 11 Bn East York’s Reg’t. He first served as a 2/Lt with the London Regiment and joined the 12 Bn “Teesside Pioneers” in a draft of replacements in October 1917 at Moislains. Despite being a pioneer unit 2/Lt Bocking and the battalion were in the thick of the fighting at Bourlon Wood in late 1917 and during the enemy spring offensive of early 1918, where they fought on the river Lys. The break-up of the 12th battalion began on May 5th when 2/Lt Bocking and other officers and men were returned to the base depot at Calais to be redeployed. He was then attached to the 11 Bn of the East Yorkshire Regiment and was killed in action with them on 21/8/1918 at the age of 20. He fell in bitter fighting for the Outtersteene Ridge not far from Bailleul. Bernard 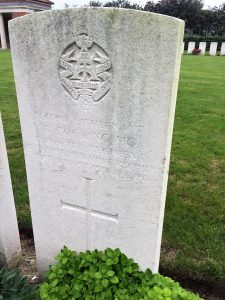 Bocking’s grave can be seen today in Outtersteene Communal Cemetery Extension three miles south west of Bailleul, Pas de Calais. In August 1918 he was awarded MC for gallantry and devotion to duty. He died only three days before his younger brother John Webb was killed. He is also remembered at St Lawrence Church, Gnosall Staffs.  His obituary and picture appeared in the Staffordshire Advertiser 7/9/1918.  b1898 Fenton, Staffs, and brother of John Webb, Selwyn George and William James, below. Third son of John Child Bocking b1866 Abney, and Mrs Sarah Bocking. His father who attended Cambridge and in 1911C was at Gnosall, Staffs, the Parish vicar, was the illegitimate son of Tobias Child, (of Furness House, Hathersage, now called Hawthorne Dene), the Victoria Works owner, and Mary Bocking, b 1846 Abney. Mary was sister to George Bocking b 1830, father to William and grandfather to William ‘Billy’ Bocking, who were the Clerks to Hathersage Parish Council, from its formation in 1894 until 1937. Billy had the corner shop opposite the Little John Hotel on Station Road, Hathersage.