He was listed as a’clerk’ when he originally enlisted in the RNVR on 24/1/1916 at Tyneside (as denoted by the suffix letter’T’ in his service number; TZ/9952). Rank; Ordinary Seaman. Eventually called up to RN Division Wireless Section on 25/7/1916, when until 26/9/1916, he was on the stength of HMS Victory VI (Crystal Palace Training Depot), until 26/9/1916 at which point  he was; “Discharged (Parents of German origin)” when his character was given as ‘VG’ and ability as ‘Sat’. He was then shown as being at Sheffield recruitment Office from where on 2/11/1916 he was transferred to the Army, to D Coy, 31 Bn Middlesex Regt, Pte, (later; temp Cpl) G/71695, and later 6 I.L.Coy. In 1917 shown as being in (probably attached to) R.F.C. and in 1918 he was shown in a school publication, as transferred to the transport service of the Royal Air Service. His name is on the Ecclesall Hall Memorial plaque. (Because he was of German descent he became part of special units within the Mddx Regt and would not have served in the front line. The prefix; ‘G’ to his number indicates this classification). He was awarded the Victory & British War medals.

John Percy, b Sheffield 4 March 1894. Brother of William Swinnerton Widmann below. Most of the following information came from King Edward VI Grammar School, Retford, pages, where he was a pupil from 1908. In 1910 he won his Colours there in football as a half back. He left there in 1911 and went to live at Bacharach, near Bingen in Germany, but by Spring 1913 was working at a steelworks in Belgium. In October 1914, having returned to Sheffield, a Belgian soldier friend sent him a letter giving a vivid description of the fighting in beleaguered Antwerp, which the Sheffield Telegraph published on 10 October 1914. He moved to work in Spain, from where he returned to England in Spring 1916 to join the Colours.

John Percy became a Certified Tax Clerk with the Inland Revenue in 1926 and became a committee member of the Hathersage branch of the Royal British Legion in November 1932, yet in the Sept 1939 Register, he was shown as ‘single’ living at ‘Elmslea’  New Beacon Road, Grantham, after when he too went to live at ‘Birchfield’, Hathersage. He later stayed at the ‘Scotsman’s Pack’ Inn, Hathersage, for some 20 years, but from about 1962 until his death on 13 Jan 1974, he lived at 2 Brookside Cottages, The Dale, Hathersage. His grave is also that of his parents in Hathersage Churchyard. 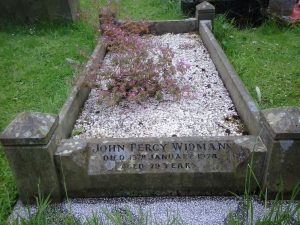 He was remembered in Hathersage, as walking with a distinct limp from an injury to one leg, possibly as a result of a motor cycle accident.

His father was Carl Wilhelm Widmann, b 16 Feb 1857 Reutlingen, Würtemberg, Germany, but living in Sheffield since 1882. He married Polly Swinnerton in 1884 and became a naturalised British Subject in Mar 1896 when living at 220 Chippinghouse Road, Sharrow, Sheffield., a clerk & ‘foreign correspondent’. 1901C living at 348 Crookesmoor Road, Sheffield, but by 1904 and in 1911C the family was living at Highland Grove, Worksop. Then by 1919 (Whites Directory) living at 72 Button Hill, Ecclesall, but by 1923 living at Birchfield, Jaggers Lane, Hathersage. (He became the Cuban Consul at Sheffield in 1921, operating out of; Stock Exchange Buildings, Commercial Street). Carl died 12 Apr 1925 & his wife Polly died 13 Dec 1938, both at ‘Birchfield’.