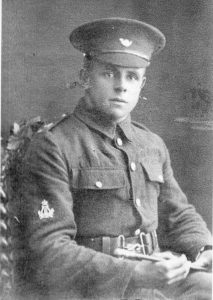 Northumberland Fusiliers.  (DC 18/11/1916 p1 & 4; wounded). (HPN 25/11/1916; ‘seriously wounded Oct 1916 in Somme Offensive’). He was buried for several hours after the trench was blown in by a shell, and was later removed to the base hospital at Sheffield  suffering from internal injuries and ulcerated eyes. His daughter said he had shrapnel injuries to his eye.    Otherwise it has not been possible to find out much more about his army career, other than he was a ‘bandsman’.  b 15 Jan 1896 Fox House, Hathersage, brother of Frederick Thompson above and Percy Roberts Thompson below. Son of Alfred Roberts & Maria (Garlick) Thompson, and cousins of Alfred Thompson, John Thomas Thompson, Harold Thompson and William Henry Thompson. . Listed on 1918 Absent voters shows him as living at Grindleford which gives no service information. He was a member of Grindleford Brass Band. He married Nellie Askham from Eyam in 1925.