b Waleswood, Yorkshire, on 6/9/1890, to Walter and Harriet T. Hardwick Smith.  In 1914 she wasworking as housekeeper at Ivy Deane, Back Lane, Hathersage.  (see Marion Peace) Subsequently she took nursing courses and volunteered at the Hathersage Red Cross Auxiliary Hospital. While there she met and became engaged to patient Charles Milton Iles from Cornwall, Ontario, Canada.  (See above).  She emigrated in June 1919, and they were married on 10/12/1919. 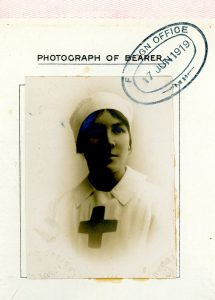