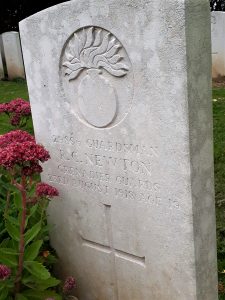 France. Ref; 4-K-4. b 1900, son of Grace Newton (née Heaton, b Sheffield) of Crossland Road. His Grandmother was Sarah A Crossland. The Crosslands were one of the oldest families in the village, but have subsequently died out. The Newton’s were beset by tragedy; father Herbert Bennet Newton died a year after Raymond was born in 1900. In 1901C Raymond was living with his widowed mother at 347 Sharrow Vale Road, Sheffield, and sister Irene, who died in 1905, age about 9. In 1911C Raymond age 12, living with his mother, a boarding house keeper, at 14 Thompson Road, Sheffield with 6 boarders and a servant.