1911C based in Ireland.  Capt, later Major, then Brigadier General. Served with the Kings Shropshire Light Infantry 2nd Bn at Secunderbabab, North west Frontier, India. 1914 Returned to UK and was made CO of 6th Bn K.S L I and led them into the Somme battle at Delville Wood Flers Courcelette. After which he was placed on the Staff Supply Roll and had a variety of appointments including CO of The Corps Infantry School. April 1918 appointed CO 1st Bn K.S.L.I but only lasted a few weeks due to ill health. 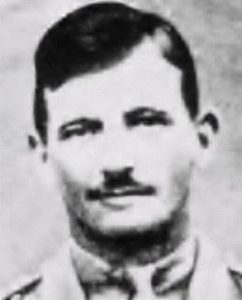 They had a son, also Godfrey; also Capt K S L I. Killed Northwest Frontier in 1935 awarded the VC & MC , another son David, was Brigadier General in the Royal Irish Fusiliers and awarded a CBE.