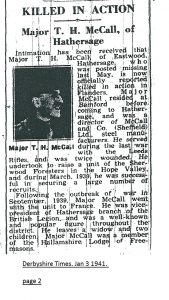 Capt 8 Bn West Yorks (Leeds Rifles) and was twice wounded. He lived at ‘Eastwood’, opposite Hathersage Church, where the Rifle Club met between the war years. He was successful in raising a large number of recruits for a Sherwood Foresters unit in during March 1939, before he served in WW2, 92248 Major 215 Bn Sherwood Foresters, when he was the first Hathersage man killed in WW2 during the evacuation of Dunkirk on 27/5/1940, although it was only later that year his death was confirmed.  b Feb 1894 Haddington Burgh, East Lothian, Scotland. 1901C the family is in Gloucestershire. His father was Hardy Bertram McCall (an author whose books are still in print). 1911C at school, in Richmond, Yorks, listed as Hardy McCall. Family firm was McCalls Reinforcements, Sheffield.