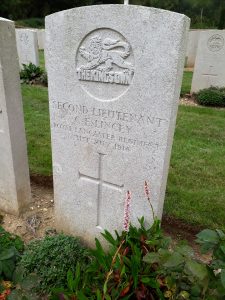 b 1881 Skelton in Cleveland.  1911C living at Mount Pleasant, Highlow, a bank cashier. Only son of Rev R Lincey, Rector of Milton Dameral, North Devon, he worked for seventeen years at the Sheffield & Hallamshire Bank. He was to have been married to Mabel Milnes Morton, of The Mount, Sheffield, who was a nurse in a military hospital in France, and the news of his death was given to her by a friend of his, who was wounded in action and taken to her hospital.