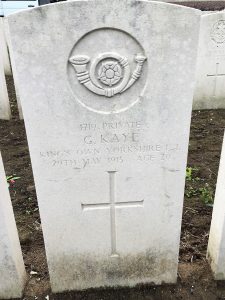 ✟ ≠ Pte 1719 2/5 KOYLI, D of W 29/5/1915, buried at Merville Communal Cemetery, and also remembered on the Whitwood War Memorial. b 1894 Whitwood, Castleford, and became a glass blower at Whitwood Mere. He was brother to James below. Their father James Kaye was b 1862 Hathersage, who on 1911C was at Whitwood Mere, Castleford and seemed to have had a variety of names. On the 1871C in Hathersage he was shown as James Key, and listed under parents Joseph & Fanny Hickmon (actually ‘Hickinson’ and his mother was Frances Key, which suggests he may have been Illegitimate).