The wooden cross from his grave in France now hangs in the Parish Church. He also appears on another memorial somewhere according to the inscription on Hathersage War Memorial.  b 1895 Rotherham.

One of six children, Vera, Enid, Monica, Geoffrey and one who died while still at school. Parents; Reginald Edward Hodgkinson JP & Margaret Jane. Educated at Clifton College, played 1st XI Cricket there in 1914.  He lived at Hazelford Hall and his family later lived at Moorseats, Hathersage. 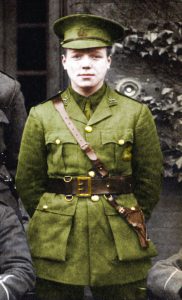