His family’s grave is in Hathersage Churchyard. b 1896 Hathersage. 1901C living at Mount Pleasant, Highlow. He was engaged to Alice Mosley, from Harper Lees Farm, who after Reginald died became Mrs Albert Stuart Botham in 1922. The Eydes family can be traced to around 1786 at Peppercorn (just S of Shatton, in the grounds of Westfield) then Old Lees Farm, (cow keepers, farm labourers, game keepers and farmers) until about 1871 when the main part of the family migrated to Sheffield.  At some stage in the late 19 century, Thomas b 1853 at Hope, one of the family of the nine, and  Reginald’s father, farmed at Callow Farm, Highlow, near Offerton Hall, where in the mid-20 century, Lawrence Dungworth farmed (see above). 1911C family lived at Callow Farm, Highlow, with father Thomas and mother Martha Hestor (neé Frost b Eyam Woodlands 1867). Thomas and Martha were married at Hathersage in 1892. Reginald’s siblings were; Frank, b Hathersage, April 1894, died 1/7/1912, (never married), Robert b Hathersage Oct 1895, died Mar 1966, (married Maud Bagshaw 1919, at St Barnabas Church, Bradwell. No children traced), who probably lived at the Homestead Farm, Eyam. There was also a sister; Mary b and d 1899. 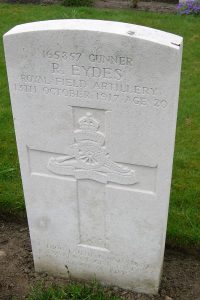