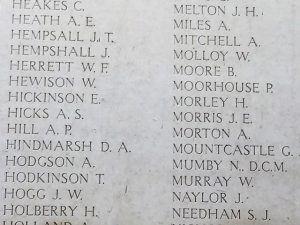 ✟ ≠ Pte 26094 2nd Bn Lincs Regt.  KIA 31/7/1917. Remembered on the Menin Gate Memorial, Ypres, also at St James, Kalendar Memorial, St James Church, Grimsby. (There is a pamphlet published listing all the fallen from Grimsby). b1887 Grimsby. 1911C living in Grimsby, a marine fireman. Son of Edwin (some times; Edward) Hickinson b 1866 Hathersage and on 1911C living in Grimsby a blacksmith’s striker, who had two siblings, both b Hathersage (to mother Ann Higginson b 1821 Barnsley. On 1871C she was a widow), John William b 1870 and Elizabeth b 1868. On their birth register they are called ‘Higginson’. By 1881C their mother Ann had remarried and become Ann Clark, living in Lincolnshire and the children’s name changed to ‘Hickinson’, future records including marriage then used ‘Hickinson’ and Edwin alternates between Edward and Edwin.  John William never married, but Elizabeth on 1911C is widowed, (her husband had been a mariner) living in Grimsby and she had two sons who served, who were therefore Ernest’s cousins; see below for James Henry Johnstone b Grimsby 1891, and George Arthur Johnstone also b Grimsby.