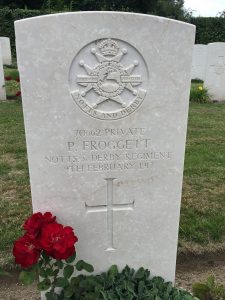 Grave; Vermelles British Cemetery , Pas De Calais. (Listed as P Froggett on Sherwood Foresters Roll). (DT 24/2/1917, article about his death with photograph, his mother Hannah (née Darwent b Thornhill), received a letter from a comrade and friend saying he was killed about 7.10 am and did not suffer). Also appears on Hope Memorial.  b 1892  Hazleford son of John Berrisford Froggatt and grandson of John Bocking Darwent, a well-known local preacher. Brother of John Beresford Froggatt above. Family farmed at Hazelford before moving to Thornhill following the untimely death of his father John in 1893. 1911C living at Thornhill.  Before joining up he worked for Aaron Turner, farmer of Bamford. He was the main supporter of the household.