ă Joined up for four years in the Derbyshire Yeomanry Territorial Force, at Heeley in Feb 1912, (Heeley was then in Derbyshire) before moving to Garner House Farm, Shatton, in Dec that year. Promoted L/Cpl then Cpl in 1914 and was 6 months in the Mediterranean Expeditionary Force. On his return he was admitted to Cardiff, Welsh Metropolitan War Hospital for 18 days with a less severe form of Typhoid. He then was posted from the 1/1 to 1/3 Regt of the Derbyshire Yeomanry, and in Feb 1916 to the 3 Mounted Brigade. The 1 Derbyshire Yeomanry fought in the very harsh Salonica (now Thessalonica) campaign on the Macedonia/Greek/ Bulgarian border. On 26/6/1917 while still a Cpl he was awarded the Military Medal for conspicuous gallantry in the field,  and was twice ‘Mentioned in Despatches.’ He then served in the UK until Feb 1918, when attached to the Scots Greys he became Riding Master at the Cadet School at Netheravon, Wiltshire. He was granted temporary 2/Lt commission in the Reserve Regt of the Dragoons in August that year, after already serverd nearly six years. WO 374/21232.

On Absent Voters list of 1918 he is  shown as; 75106 Cadet L.M.M., B Squad. No 1 Cav School, but this could be out of date information. He was gazetted out of the Service in Feb 1919, still single, his permanent address given as Garner House Farm, Shatton. He is listed on the Shatton side of Hope War Memorial, recognising those who served.

b 1891 Norton, one of eight children and eldest son of Maurice and Mary Ellen (nee Ortton). 1901C living at Wellhead Road, Heeley, Norton parish. 1911C; living and working on Carfield Farm, Heeley, which has since been built over apart from a small area of allotments. Brother of Edgar Dungworth, above. In 1919 he married Alice Dearnaley at Worksop, and later moved from Garner House to Callow Farm, Highlow. They had two sons, Donald and Leslie, and daughters Margaret and Dorothy Alice. Donald qualified as a ‘Vet’ and had a distinguished career in Canada, Bristol (UK) and University of California before he died in Canada in 2005. Leslie lived at Fersby Hall Farm, near Conisborough. 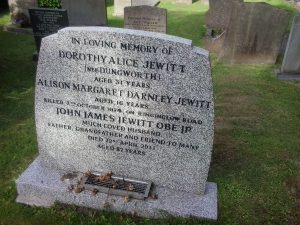 Dorothy married John James Jewitt, but was tragically killed in a motor accident, together with her daughter, Alison Margaret Darnley on Ringinglow Road, Sheffield on 7/10/1974.  Lawrence had a cavalry regimental tattoo on his lower arm in the form of a horseshoe. In WW2 Lawrence formed a troop of Home Guard mounted on his horses, to stop them being taken for the Army! He judged several times at the ‘Horse of the Year Show’ at Olympia, London. He died in December 1965. His sister Rose Ellen married Arthur Singleton, (possibly related to the Hathersage buttons factory ‘Singletons’?).