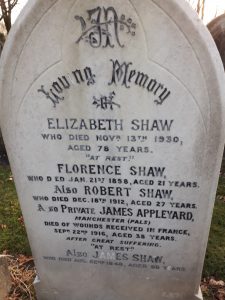 b 1879 Baulk Lane, Hathersage, youngest son of James and Hannah Appleyard formerly of Oddfellows Row, Hathersage and brother of Clara, mother of Sydney Hind, below. 1911C; Living at Rusholme, Manchester, James was the husband of Mary Alice of Prestwich, Manchester and he was a member of Manchester Police Force and uncle to Wilson Eyre Appleyard below.